RULE 1, part two: Get the right varieties of roses (climbers) 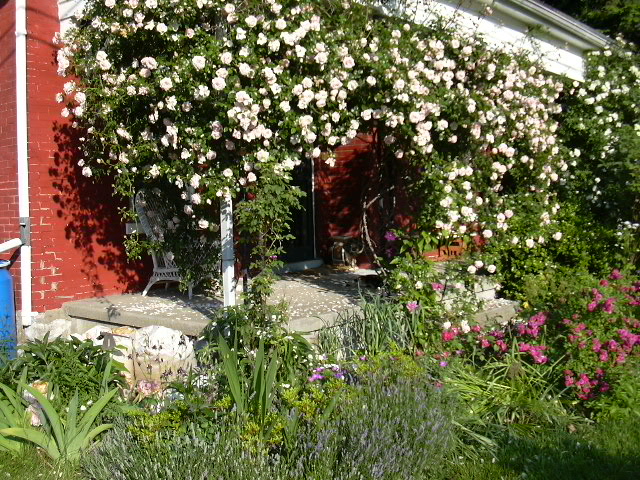 Awakening/New Dawn. The big honkin’ rose growing up and around the top of my porch is Awakening, a sport of New Dawn.   A sport is a spontaneous genetic mutation, and some kinds of plants tend to “throw spots.”  Every so often, a rose will start sprouting branches that have different color flowers, or flowers with more or fewer petals, or long climbing branches off  a plant that has for all its previous existence, been a petite shrub.

Awakening is like something out of Sleeping Beauty, where giant brambles grew over the entire castle to protect it from intruders while everybody slept for a hundred years.  Its main canes are the thickness of a spade handle and covered with huge, bloodthirsty thorns.

This plant was about seven years old when this picture was taken.  It’s supposed to grow to fifteen feet.  HA!  This plant grows about ten feet straight up to the  porch fascia; then it grows eight or ten feet over to both sides, and then around the corner, and hangs to the ground, where it was starting to root.   That’s thirty feet, easy, and still going strong.  I tie it up with thick rope.  Every so often I get up there and hack a bunch of branches off it so it doesn’t eviscerate the mailman.

In 1930, its parent variety, New Dawn, received the very first plant patent the U. S. Patent Office ever issued.   It’s healthy and huge and hardy to Zone 4.  Awakening is  similar to New Dawn in every respect except that, instead of having about 30 petals, each flower has over a hundred.  This is its glory and its Achilles heel, and the reason I will never plant another one of these unless I move to the desert.

Having so many petals makes it susceptible to, in overly wet or overcast weather, what they call balling — the petals stick together and the flowers never open.  Instead, they just turn brown.

Worse still, they never fall off the plant like normal flowers do, either.  They just stay, round and brown and depressing, for weeks and weeks, until you get up there on a ladder and cut off every one.   In Kentucky, this happens about once every four years.  It happened this year [luckily at the end of the first big bloom flush].  The first time it happened, I cried.

The parent plant, New Dawn, having fewer petals, doesn’t have this problem.  Balling happens only to flowers that have a lot of petals.

The plant is gorgeous and thickly foliaged with shiny leaves.  I love it and will plant more New Dawns as soon as I get the room.

Meidland Red. This plant’s tag claimed it grew 3 feet tall by 3 feet wide.  Mine must have sported a climbing variety, because it does climb and now is higher than my head.   It’s probably the most bulletproof rose in my yard, after Caldwell Pink, and is always thickly foliaged with shiny leaves.  It’s a single rose, with five or six stoplight- red petals per flower, no fragrance, a white eye, and a crown of golden stamens in the center of each flower.  The native bees love this one.  It mostly always has some flowers, and several times a summer is completely covered, like in this picture.  It has ferocious thorns and would be a great choice to cover an ugly fence.

Buff Beauty is also a favorite.  Mine is growing in an inauspicious location under an elm tree.  It clambers happily among the shrubs growing over the fence and with very little encouragement up into the elm.   Last fall I looked up into the elm and wondered what yellow object was somehow up in my tree.  It was Buff Beauty, doing its thing, about twelve feet up.   It doesn’t constantly cover itself with blooms, but when it does bloom, it’s so pretty it’s worth the garden space.

The argument for once-blooming roses: Exhibit A

9 Responses to RULE 1, part two: Get the right varieties of roses (climbers)

This site uses Akismet to reduce spam. Learn how your comment data is processed.